[vc_row css=”.vc_custom_1487355812025{padding-top: 20px !important;}”][vc_column][vc_column_text]Think of Steve Bevilacqua’s new business venture as the ultimate do-over. Retired at 45, flush with success from the recent sale of his paving business (and having apparently fished the Chesapeake Bay and Gulf of Mexico dry), he reassessed his priorities and decided he’d had enough…of retirement.

Armed with newfound enthusiasm and a desire to do some things differently this time around, he acquired a small parcel of land in Uxbridge, Mass., bought a 300-ton-per-hour (TPH) EX 10248 asphalt plant from Asphalt Drum Mixers (ADM) of Huntertown, Ind., and founded Bevilacqua Asphalt. Today, just months into the endeavor, he has established himself not just as a supplier of asphalt product, but also as a company that, through some unconventional approaches, is helping ensure the success of smaller and mid-size companies in the area.

Put Everything in its Place

To see Bevilacqua’s new site is to witness efficiency. Set on a mere three acres, the operation effectively segregates traffic between the hot mix plant and the aggregate operation that supports it. Doing so ensures a smooth flow into and out of the new facility, according to company owner and president, Steve Bevilacqua.

Efficiency was one of my major focuses when I designed this new facility,”

“Efficiency was one of my major focuses when I designed this new facility,” he said. “I am an engineer and enjoy doing layout projects like this, so I designed it myself, then went to an architect and site planner and told them what I wanted. We worked hard to make certain that the entire construction process was an organized effort and it paid off. Most people said getting a new plant up and running would take a year or better—it was six months from the day we broke ground to our grand opening.”

He said he learned a lot running his previous operation, Bevilacqua Paving which, after 15 years in business, had grown to be one of the largest and most in-demand companies in the area.

“When I sold the company, we had more than 80 trucks and were putting down better than 300,000 tons a year,” he said. “Despite being that big and having some real clout, there were many times when I wished there was a company that really cared about us and our needs. Even back then I remember thinking that, if I ever had to do this again, I would be that company. I guess this is my chance to do so.”

Bevilacqua has distinguished himself from other asphalt companies by taking the traditional paver-to-supplier scenario—in which companies start out doing paving, then build an asphalt plant to meet their needs—and standing it on its head. 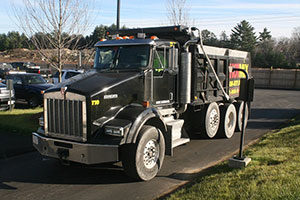 “Before we opened, we purchased a small fleet of hot mix transport trucks and created a separate business unit called Hot Mix Onsite Delivery dedicated to delivering asphalt to companies that pave. The concept is very much like what happens with concrete paving: customers—everyone from driveway pavers to contractors doing parking lots—call us to order what they want, when they want it. We felt that by offering this service we could broaden the scope of projects available to smaller and mid-size companies.”

Bevilacqua wanted to make certain that his company wasn’t seen as competing against those smaller companies and contractors, but would instead become the go-to resource for them. To ensure that, he also began offering paving equipment on a rental basis.

“In addition to those trucks, I also bought a nice selection of paving equipment including LeeBoy pavers, large and small rollers from Cat and Bomag, a Salsco sidewalk paver, Miller berm machines, and more. And we will deliver and pick it all up. So if a company has only marginal paving equipment (or none at all), we offer it to them along with the asphalt. The bottom line is we want to see them succeed and grow. With our services, a guy that normally does small work can now get into medium sized work or larger. He doesn’t need to buy a fleet of trucks or paving equipment to compete.”

The new approach was an uncertain commodity when Bevilacqua Asphalt opened its doors, but has since more than proven itself. Steve Bevilacqua says the paving equipment is almost continually out on rental and the Hot Mix Onsite Delivery trucks haven’t stopped moving since startup.

“Catering to smaller contractors now represents about 35 percent of our overall business and we feel we’ve only scratched the surface. This is obviously a niche that needed to be filled.”

Early on in the planning and decision making process, Bevilacqua says that he was looking at all the options available to him when choosing a plant, but ultimately chose ADM to provide the centerpiece of the new site.

“I had an ADM plant in my former business and had tremendous success with it, so I really saw no reason to look elsewhere,” he said. “We have a very rigid maintenance program that we follow, but I was still blown away by how reliable that plant was for us. I can recall one year when we output better than 330,000 tons of product and had a total of three hours of downtime—that’s impressive by anyone’s standards. So we went back to ADM, had them put together a package for us, we reached agreement on a price and we were off.” 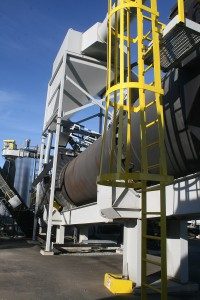 The 300 TPH plant in place at Uxbridge features an 8-foot 6-inch diameter by 48-foot long rotary drum; a 60,000 acfm baghouse; five 14-foot by 10-foot cold feed bins, each with a rated 30-ton capacity; two 30-ton recycle bins, three 150-ton silos with drag conveyor and transfer drags; and system controls that Bevilacqua mounted in his own control tower located one floor above his company offices.

“We’ve developed a nice rapport with the folks at ADM and knew that we could depend on their engineering expertise to help make this tight fit possible,” Bevilacqua said. “We weren’t disappointed—the install went smoothly and any bugs that had to be worked out were small ones. It all came together nicely.”

Bevilacqua will be the first to admit, given their status as a startup company and their new business focus, a 300-TPH plant was probably overkill. However, he said the reason for going that route was part unbridled optimism about future growth and part a lesson learned from his father.

“My dad always says, ‘If you need a 10-ton buy a 20-ton. You will always outgrow and overtax a small one.’ He’s a retired professor from MIT and is one of the nine key people who built the guidance system for the Apollo 13 space program. Who am I to argue with him?”

Looking at Bevilacqua’s operation, two things become immediately apparent: one is the overall cleanliness of the plant and its surroundings, the other is the aggregate supply bins which have canopies over them. To the first point, Bevilacqua says that he wanted to ensure that people looking at the plant would like what they saw. In addition to more than ¾ of an acre of grass, he planted more than $150,000 of mature trees and shrubs.

“There was some initial reluctance from a local group to us starting up an asphalt plant in this area and I wanted to try to prove to people that asphalt and eyesore don’t have to go hand-in-hand. I think we’ve done that. As to the protective coverings over the aggregate bins, that’s something I knew I wanted from the beginning. It just made sense to me that starting out with a drier aggregate would lower the demand on the drying portion of the process.” 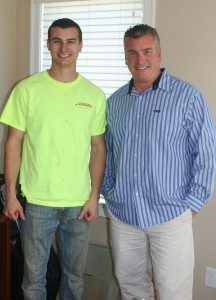 Though it’s a bit early to tell, he said that between the coverings, the 100 million Btu/hr NovaStar Low NOx burner from Hauck Manufacturing Co., and the overall improved efficiency of the new ADM plant, he is seeing a significant reduction in fuel costs over that of his previous operation.

“We are burning about 40 percent less gas per month now than we were back then and that’s music to my ears,” he said. “People tend to look at the asphalt industry as one that pollutes the earth—we’re here to prove otherwise. I am a certified arborist and an air quality engineer. Through the steps we’ve taken, we’ve dramatically reduced our carbon footprint. The public needs to see that asphalt plants can have a sense of environmental awareness, and I’d like to think we’re playing a role in making that happen.”[/vc_column_text][/vc_column][/vc_row]

All Posts
News
Blog
Events
Translate »
We use cookies to offer you a better browsing experience, analyze site traffic, personalize content, and serve targeted advertisements. If you continue to use this site, you consent to our use of cookies.AcceptPrivacy policy