[vc_row css=”.vc_custom_1487355812025{padding-top: 20px !important;}”][vc_column][vc_column_text]Companies that add asphalt production to their product offering cite many reasons for doing so. These include a need to better serve its customers, a desire to expand its list of capabilities, dissatisfaction with bottlenecks caused by supplier delays, and more. For Hoban Equipment Limited (HEL) the company saw a real niche that could be established. 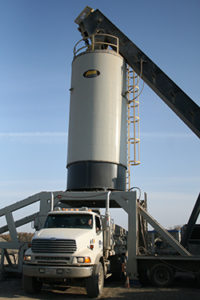 Companies that add asphalt production to their product offering cite many reasons for doing so. These include a need to better serve its customers, a desire to expand its list of capabilities, dissatisfaction with bottlenecks caused by supplier delays, and more.

HEL’s strategy has proven sound as the company wraps up its first season as an asphalt producer, made possible with the addition of a 250 tph plant from Asphalt Drum Mixers. In that inaugural season, they’ve not only played a key role in paving a large section of the Trans-Canada Highway (TCH) in Saskatchewan, but they’ve also taken their business to a whole new level.

Established in 1966 and headquartered in Salmon Arm, British Columbia, Hoban Equipment Ltd. has built a solid reputation throughout the region for its expertise in road and subdivision construction, mine and landfill reclamation, and work with wildlife sites. In addition, the company has supplied both its own and other operations through the operation of ready-mix plants and the aggregate sites used in support of those plants. According to project manager, Mike Tiffin, making a move to add asphalt simply made sense.

“Years ago, the organization had done some asphalt paving, but it was a very small part of their business. In recent years, any asphalt work needed for our projects was subcontracted out. This resulted in schedule delays, bonus payments to subcontractors and overall less control of our projects. When a decision was made to grow the business, having that asphalt capability was almost a given. Our management was well aware of what can happen when you don’t have access to a reliable supply of material—at a price that can be controlled. Our president, Clayton Hoban, did a fair amount of research before choosing Asphalt Drum Mixers to supply the plant. We took delivery earlier this year and were up and running by early July.”

Because they were looking to gain market share in areas outside the province of British Columbia, HEL chose an EX8842, which packs an impressive 250 TPH production into a portable plant.

“Management was looking for HEL to expand far beyond their existing range of operations and capture as many key growth markets as they could,” says Tiffin.

“To do so and ensure that a supply of asphalt would not be an issue for any HEL client, regardless of where the projects are located, management knew that a portable asphalt plant would be the only way to go.”

Hoban’s rationale for looking eastward toward Saskatchewan was a sound one. The province is rich in resources such as coal, oil, natural gas and potash, and until recently, had maintained controls, which discouraged capitalizing upon these natural gifts. A new progressive government has opened up those resources, resulting in a nice influx of cash into the province.

“As a result, after decades of shying away from much-needed investment in highway infrastructure, the provincial government is finally starting to make upgrades in those areas. We recently landed the bid to repave 17 km of the eastbound Trans Canada Highway east of Regina, a nice contract that we were able to competitively bid, largely because we had a handle on asphalt supply and costs. That portable plant made an immediate impact and should continue to do so given our current backlog and the amount of work that’s now being tendered.” 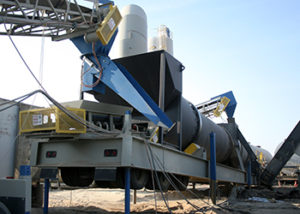 To ensure that a supply of asphalt would not be an issue for any HEL client, regardless of where the projects are located, management knew that a portable asphalt plant would be the only way to go.

Setup can often be a sticking point in any move to a new plant, with everything from planning on delivery to the actual erection coming into play. According to Tiffin, they were impressed with ADM’s handling of the entire plant setup process.

“Things could not have gone better from our perspective,” he says. “The silo erection and the lime erection equipment was outstanding and we were really impressed with the system on the silos for material load out. The whole process, though, was made better in part because of the help the crew from ADM provided. They’ve run plants before so they understood the challenges and the aches and pains you go through to get a plant up and running. It’s obvious that they are not just office workers who came out to direct things. That meant a lot to us and allowed us to be ready when we needed to be.

Tiffin adds that the EX8842’s ease of use was one of the plant’s selling points and it has not disappointed. “It’s just not complicated,” he says. “I have better than 20 years’ experience running asphalt plants with previous employers, but we brought in a guy who never ran a plant like this before and he was still up and running it in no time at all.”

“I’ve run or supervised plants from almost every major manufacturer, and learned that the more bells and whistles a plant has, the better the chance that something will go wrong.  The ADM plant we bought does everything we need it to do—and does it well—without the added risk of needless downtime. And, by keeping the number of ‘extras’ down, ADM is able to offer a plant that doesn’t break a company’s budget.  That’s saying something these days.”

The TCH project to which Tiffin referred above, had a requirement upon it that the asphalt mix contain 30% Recycled Asphalt Product (RAP), a stipulation that, with some plants, could have presented challenges. The ADM plant, he says, handles the RAP without any problem.

“Because you indirectly heat RAP, some plants have trouble heating the aggregate making it difficult to keep your tonnages up. In addition, using RAP often increases the possibility of plugging up the bag house due to light ends of the fuel coming in. We never found anything like that to be an issue. We got the production rates we needed—even with the RAP—and never had a plugging issue with the bag house at all. The plant ran very well with RAP for us.”

Satisfaction extended beyond the asphalt production phase of the project as well, with Hoban’s crews laying down the 17 km of roadbed on schedule, within budget, and in spec.

“We have Topcon System 5 paving systems on our paving equipment which we feel probably resulted in one of the best rides in the Province on this road. In fact, Provincial inspectors brought out profilographs to check the road for smoothness and rideability and the quality was so high that we will probably receive a nice bonus for our efforts.  How can you argue with that?”

Hoban is currently tearing down the ADM plant in preparation for the next project. Tiffin says during the winter season they will perform general maintenance on the plant’s components, before putting it back on the road again in spring.

“We really only had the plant up and running for the last half of the paving season this year,” he says. “We got a good feel for what it can do, putting out better than 60,000 tons in that time frame. But we are looking forward to taking it out next year and tackling a full plate of projects. The work is definitely out there and with this new capability, we are better equipped than ever to handle it.”[/vc_column_text][/vc_column][/vc_row]

All Posts
News
Blog
Events
Translate »
We use cookies to offer you a better browsing experience, analyze site traffic, personalize content, and serve targeted advertisements. If you continue to use this site, you consent to our use of cookies.AcceptPrivacy policy